To much fanfare, the media in mid June were awash that a photograph of the iceberg that supposedly sank the Titanic was to come up for auction by Henry Aldrige's of Devizes. Neglecting the hype that it was "rare" or "ultra rare" (it was actually neither, having been previously published and had even been included in a touring exhibition of Titanic memorabilia c.2000), a number of specious claims have been made for this photograph.

The provenance of the photo is undisputed; it originated from Captain Wood of the steamship Etonian at 4pm on April 12th, or over 2 1/2 days before the disaster to the Titanic. He sent a copy to his grandfather, writing, I am sending you a sea picture, the Etonian running before a gale and the iceberg that sank the Titanic. We crossed the ice tracks 40hrs before her and in daylight so saw the ice easily and I got a picture."

Neglecting the fact that there so many icebergs in the area that the claim that this was the iceberg is nothing more than speculation and bombast, the claim is dented by the co-ordinates given to the iceberg: 41 degrees 50 minutes North, 49 degrees 50 minutes West. This is only 9.2 miles, or 8 nautical miles from the wrecksite (41 44 N, 49 57 W). This proximity seems to add a convincing weight to the photo and the claims of Captain Wood.

Unfortunately, it is not that simple (nothing in Titanic-lore ever is!) for one vital aspect of North Atlantic navigation has been ignored, or forgotten, and that is the ocean drift. In this area of the Atlantic, two different mechanisms were competing; the Labrador current, a cold, north-south running flow of water at about 1 knot, and then slightly further south, the warmer Gulf Stream/North Atlanic Drift, running in a roughly east, or north easterly direction at a slightly higher speed (some authorities put this at between 2 - 4 knots).

It would seem that in this area of the Atlantic, the Labrador current was the dominant drift. If we take a value of 1 knot south, then, after nearly 56 hours, the iceberg would be in the vicinity of 40 degrees, 56 minutes North. Although by this stage, the 'berg would probably be under the influence of the Gulf Stream and would be heading easterly (that is, away from the wrecksite) it is obvious that by 11.40pm on April 14th, the iceberg would have drifted such a distance that it would be well over the horizon and therefore invisible to the Titanic.

This is not the first time that a consideration of drift has destroyed the authenticity of a Titanic/iceberg photo, which also went up for auction a few years back coincidentally enough: see this page

Is there any proof of a north-south drift in this area? When one labouriously combs the shipping journals of the day, a thankless task that this author performed many years ago.

At 5.40am on April 14th, or the day of the collision, a German tanker, the Trautenfels, encountered an icefield. She was already north of where the Titanic would run. The Trautenfels skirted the southern edge of the icefield for 25 miles in a south westerly direction, noting that there was no clear water to the north.

24 hours later, the Russian steamship S.S. Birma was approaching the wrecksite after having steamed for many hours after receiving the SOS call from the ailing White Star Liner. The track of the Birma was later reproduced in the British press, and this is reproduced below.

Click on the image for a larger version; the notation is explained below.

In this diagram, the layout of the icefield is from the Birma's newspaper article; the green dot represents the location of the Titanic wrecksite, and the blue dot is that of the Etonian iceberg photograph. The green line is the hypothesised route of the Trautenfels. The red arrows indicate the hypothesised southern drift of the lower edge of the icefield, to the latitude as given in the sketch provided by the Birma's crew. The Trautenfels route is only an estimate as we do not know her exact path, just that she travelled in a south-westerly direction; she provided the start and end point of her diversion but there is, of course, some room for flexibility in these deduced co-ordinates given how precise dead reckoning was known to be. Given this, there is reasonable agreement between the layout of the southern edges of the icefield between the Birma and Trautenfels data.

That there was an icefield in the latitude of the Titanic on the morning of the 15th is undeniable. An armada of ships witnessed it; the Mount Temple, the Californian, the Carpathia and others. Incidentally, the Californian stopped at some indeterminate distance from the Titanic the night of the disaster. However, her position is still mired in controversy. Her alleged overnight point at 10.21pm on the 14th was just a few miles north of where the Trautenfels met her icefield; but she was able to continue her westward progress. The Californian was halted by the ice field and remained there until daylight, when the extent of the floe was revealed; a massive scatter of ice and icebergs stretching north and south in her path that only permitted the slowest of transits.

An ice field that permitted passage along its southern border at 5.40am ... and a huge floe that caused one ship to stop for the night, nearly 17 hours later. This could only have happened if the ice was slowly meandering south, eventually blocking the oncoming traffic of ships.

Futher evidence that the icefield was drifting south between the Trautenfels and the Birma's sightings comes from a ship known as the Mesaba; indeed, she warned the Titanic of perilous ice conditions that were right in her path, but to no avail. The Mesaba encountered an ice field at 42 N 50 W at 2pm on the 14th April and travelled south for about 20 miles (so to about 41 40 N), and then seems to have headed west south west to 41 35 N and 50 30 W, where the ice was cleared at 4pm. Working backwards, this puts the edge of the icefield at about the same location as the Trautenfels about 10 hours previously, and also confirms a south-west running lower edge. More importantly, it shows that where the Trautenfels could safely navigate heading west in the early hours, the Mesaba found the same latitude impassible forcing a 20 mile detour to the south.

We can then look at the letter that Captain Arthur Rostron of the Carpathia wrote to Cunard's general manager in Liverpool, which partially reads: "By the time we had cleared the first boat it was breaking day, and we could distinguish the other boats all within an area of about four miles. We also saw we were surrounded by icebergs, large and small, and 3 miles to N.W. of us a huge a huge field of drift ice, with large and small bergs in it, the ice field trending from N.W. round by W. and S. as far as we could see either way."

Daylight would be breaking soon after 4am. We do not know precisely where the first boat (No.2) was picked up, but researcher David Gittins estimates it as being a mile or two south of the wreck; this puts it at a latitude of about 41 42 North. At this location, Rostron reported an ice field stretching to the north west and south as far as could be seen. And yet, just 12 hours before, the Mesaba would be able to clear the ice field and head south west at about this point. Yet more proof that there was indeed a current driving the ice packs south.

Later in the morning of the disaster, and after some 8 or 9 hours of being subjected to drift, the Titanic's flotsam was found to be 11 miles south of the wrecksite. Without identifying characteristics, there is very little that can allow us to track the movement of individual icebergs, but this is one piece of data that allows us to quantify the direction and speed of the current.

We have confidently demonstrated that, at least between 5.40am on the 14th and about 11am on the 15th, there was indeed a southerly current of about 1 knot.

The conclusion of this is as follows: unless it was impervious to the ocean currents in the area (perhaps, if one was to ask facetiously, by being anchored to the ocean floor?) the Etonian iceberg would have drifted so far away in those 56 hours that it cannot be a contender for the one that ruptured the Titanic. Granted, there were ice fields mentioned in the area of the disaster on the 12th and 13th April, but these cannot be the same ones as encountered by the myriad of ships on the 14th. The records in Lloyd's journals are full of sightings of such floes, and by the time they had drifted south, and into the Gulf Stream, they would become dispersed and melted by the warmer water.

But, say apologists, what happened if Captain Wood got the date on the letter wrong, and the photograph was taken on the 14th? That would make his claim more plausible. Indeed it would; but records show that the Etonian arrived in New York on April 16th. A 12 knot ship could not have made it from the wrecksite to port in that amount of time.

There is one other point that we must discuss; the appearance of the iceberg. We are told by the auction house that, "There were never any photographs taken on board the Titanic of the iceberg, only images of ones in the same area in the days before and after. But Captain Wood's photograph must be the most likely of all of these images. Fredrick Fleet was the lookout who first spotted the iceberg and he later drew a sketch of it, as did crew member and eye-witness Joseph Scarrott. Their sketches both appear similar to the iceberg in this photo and have the same distinctive odd shape at the top."

Let us examine the photograph of the iceberg as seen by the Etonian:

How does it compare to the recollections of Fleet and Scarrott?

Frederick Fleet provided his impressions of the impact for the Titanic Historical Society before his suicide in the 1960s. These are provided below:

Fleet's descriptions can in no way be said to resemble the Etonian photograph. And there are some aspects that are so dubious that the pictures are rendered little more than historical curiosities. The first doodle shows the iceberg on the horizon; if this depicted reality, one must ask why the lookouts were so slow to react given that it was seen at such a considerable distance. The historical record shows that the true distance must have been much less - probably 1500 feet or less. The second diagram presents even more confounding issues, for it shows the iceberg towering over the ship. Again, the historical record puts it as being about the height of the boat deck - or 60 feet. There is therefore no reason to use these diagrams as historical truth.

We turn our attention to seaman Joseph Scarrott. He provided a sketch to "The Sphere" magazine of May 25th, 1912. This is reproduced below. 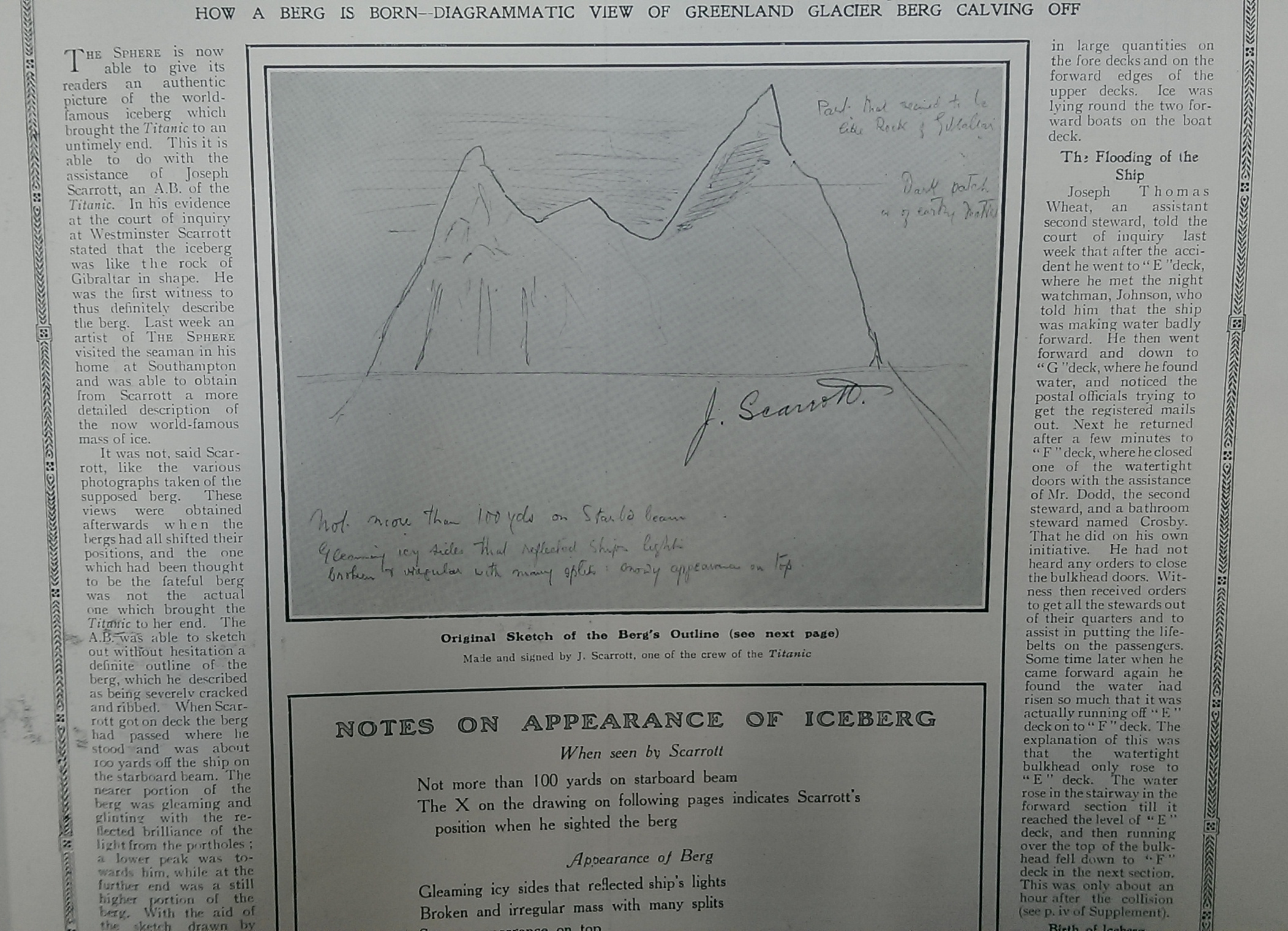 Scarrott gave testimony at the British Inquiry; where he told the court, "Well, it struck me at the time that it resembled the Rock of Gibraltar looking at it from Europa Point. It looked very much the same shape as that, only much smaller ... The highest point would be on my right, as it appeared to me."

Readers are encouraged to form their own conclusion as to whether Scarrott's description matches the Etonian photograph. I know that I have.